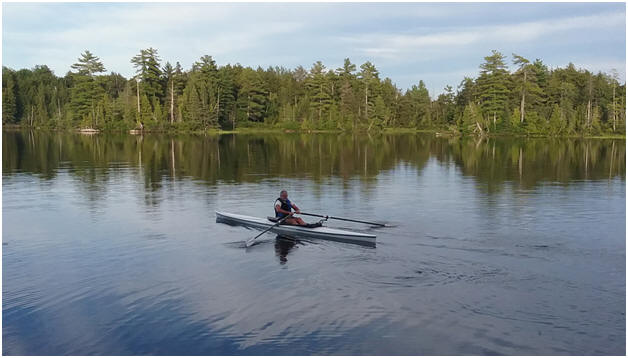 Jim enjoying a peaceful row in his new Alden Martin. 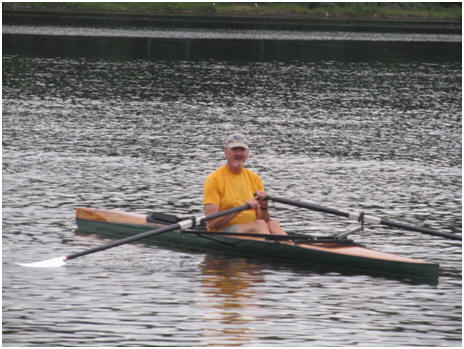 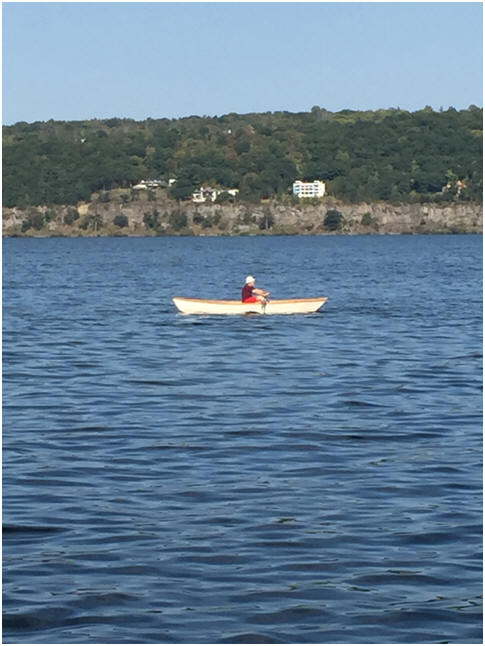 Neil enjoying his  “Manuel’s Dory”. Manuel being the Portuguese-American cod fisherman who was the tragic hero (played by Spencer Tracy) in the 1940s movie Captains Courageous. Neil’s boat is a replica of a standard 19th-c. Gloucester dory, but a couple of hundred pounds lighter. 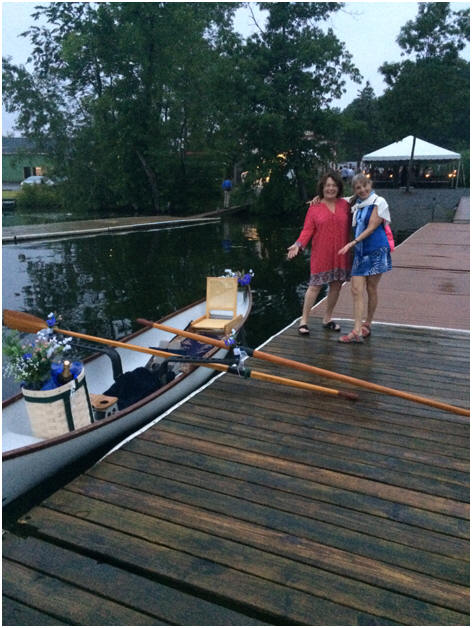 Carol and her friend decorating an Appledore Pod to row a newly married couple off to happily ever after!

Charlie having a good time in his new Adirondack Dory.

Karen and Bill enjoying their new Alden 18 on the Cuyahoga River .

Earl enjoying the Wherry 16 in the Adirondack Mountains.

Debbie enjoying her Alden 16 on the lake.

Our local Rower, Bill Martin, was in the paper!
“A man rows on a foggy Lake Flower this morning in Saranca Lake.” Enterprise photo — Catherine Moore

Sebastian getting ready to take a spin on his new Land Rower!

Mark Miller and his friend enjoying the Adirondack Wherry in Hawaiian Waters!

Brian’s beautiful sunset in the Alden 18.

George getting ready for the Blackburn Challenge in his Chester Yawl.

Deb on a 5 day day trip through Labyrinth Canyon on the Green River. Who knew the Adirondack Wherry could carry so much!

Rowing with our friend Dan, in the Water Jogger, on Glen Lake

Brace and his sister Wendy enjoying a row in the Alden 18 in Stockbridge, MA

Peter and his new Adirondack Wherry put the sailboats to shame!

JC and his new MAAS Double

Dawn and her doggie rowing in the LRM Sprint

Roger purchased a Piantedosi ro-wing and Dreher oars to drop into his canoe.  He looks like he is enjoying himself!

Bill getting ready to launch his new Alden 18 into the water.

David, in the WinTech 24, on Schroon Lake

Frank and his Echo en-route to the shore – a new way to transport a shell – by bike!

Dave and Grigory enjoying a guideboat 18 rental on Saranac Lake

Yes, you can put a rowing shell on a Porsche. Just ask John!

Astrid and Kurt enjoying their Guideboat 18

Pete, the Alden Star, and a foggy morning on Schroon Lake

Rob belongs to a group of adaptive rowers in the UK.

EDGE embodies, perhaps to an extreme, the paradigm of ³sitting as a metaphor for the human condition². Capturing the knifelike edge of the board sailor¹s fin or a sailboat¹s centerboard, EDGE¹s finely tapered skeleton suggests both readiness for comfortable rowing and the precariousness of sitting on a ³knife². Comfortable foot supports notwithstanding, the feline form of EDGE¹s custom-molded seat hints of darkness, even danger.

Rick enjoying a colorful sunset in his Adirondack Wherry.

Chris enjoying the Adirondack Wherry during a demo on Glen Lake

Mary in her Alden Martin “Ka”

David & Kathy taking home their new Guideboat 15 – Proof you can carry a GB inside your pick-up truck!

There is more than one way to carry a Guideboat 15 on a pickup truck!

Laura and Mike with their Alden Ocean Shell Double

Proof that even a small vehicle can transport a Guideboat 15.  Chuck’s ingenious idea of transporting his ro-wing strapped to his hitch mount (below) is a great idea for cars with little interior room.

Dave enjoying the Wherry during his rowing lesson

Dan and Karen at the Rowing School

9 year old Starling, our youngest female rower, in the Skimmer during her novice lesson

Stan’s locale newspaper ran this picture and an article on the Charity Event.  “About 200 participants turned out Saturday at the Tenn-Tom Waterway for the second annual Charity Poker Fun. . . . One of the high points of the daylong event was Stan Murray, who rowed the entire 27-mile round trip in his blade thin sculling boat.  Murray drew many stares from interested boaters as he fought wakes and a strong wind to finish with what appeared to be little effort.  “It was a good day on the water,” Murray said.  “I wish the wind would have been a little more cooperative, but I made it without blisters.  The poker hand I collected was awful, but I will do it again next year.”

The Garbers and Annie with their Adirondack Wherry

Susan looking forward to rowing her Regatta on the Maine coast.

Ken Maw and his MAAS 24 rowing in the Arabian Gulf.

Pete in the Guideboat 18 with family and friends!

Karen in the MAAS Aero on Schroon Lake

Amy Bush in her Alden Star

Tom Bush enjoying the lake in his Adirondack Wherry

Chris Sloan in his Echo on Glen Lake

Brian Hotchkiss in his Alden Horizon